The Santa Diaries - A Private Look at Christmas in St. Michaels 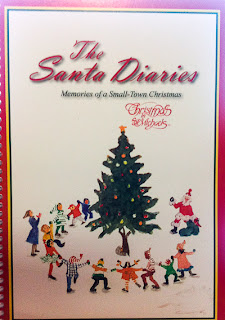 In 2011, Eastern Shore writers Laura Ambler and Mala Burt took on a writing project that became The Santa Diaries: Memories of a Small Town Christmas. In a few short months they were able to collect letters to Santa, old Christmas photographs, newspaper clippings, recipes and oral commentary on how Christmas was celebrated in the small Bay Hundred community in Talbot County.

The end result was a delightful book filled with touching accounts of what Christmas means to close knit communities.  It makes for inspiring reading.

How the Book Came About

The inspiration for the book came from Tom Campi, who had played Santa in St. Michaels for decades - AND who was from a long line of St. Michaels Santa Clauses.  Campi agreed to share his collection of the kids letters to Santa that he'd received from the local children.  Mala and Laura began the project with Campi's letters, but then put a message out to the community that they were collecting Christmas memories.  People began to send in photos and hand written recollections. Others recommend locals who could give oral commentary.  Recalling how thrilling it was to hear these memories, Laura talked about visiting the home of an elderly lady who had her entire life chronicled in neatly arranged photo albums.  As she showed the authors her photographs she talked of how she was the first in her family to go to college.  She was a widow who had been married for 75 year and proclaimed that it was a "love story that ended too soon."  The stories and memories woven into these collected quotes, pictures and letters make The Santa Diaries  a book that stirs deep emotions in any reader who has a Christmas memory.


One of the entries reads:   "When I was about 8, I wanted a penknife.  All the boys wanted them.  I got mine on Christmas Eve.  It sure was shiny.  I opened it and found the blade point broken off.  My father said he did it so I wouldn't put my eye out."  ~Wayne Reeser

Another entry reads: My dad was a farmer and we were really poor.  Kenny and I wanted bikes really badly but knew Dad couldn't afford them.  He kept telling us how badly he felt about it.  Christmas morning there were two bikes by the tree.  That strengthened our belief in Santa because he was the only one that could have done it.  Dad acted as surprised as we did! We couldn't figure out how Santa got two bikes in the sled.  Dad told us years later that he sold a couple of hogs to buy those bikes. ~Beverly Waller

The end of a hand-written recipe for Virginia ham reads:  Cook for 30 mins - turn oven off for 3 hrs. DON'T OPEN THE DOOR. Set heat again at 500 and cook 30 mins. Turn oven off and have 3 hrs or over nite. Never Open Door.   ~Edwina Murphy's recipe box.

In addition to the compilation of memories, there are spaces for the book's owner to jot down his or her own personal Christmas memories which adds a personal touch to the entire collection.

Inspiring, Touching and Uplifting
If you ever need to restore your faith in mankind, you only need to spend about fifteen minutes with this book. Reading about poor farmers who sell hogs to purchase luxuries for little children at Christmas and seeing the photos of happy communities celebrating together isn't just the St Michaels story - it's everyone's story.

The Santa Diaries was published and is distributed by Christmas in St. Michaels, a non-profit group that puts on a Christmas event in St. Michaels' historic downtown every 2nd weekend in December.  The organization receives all the profits from the sale of the book.  Those wanting a copy of The Santa Diaries should go to the event which is being held this year on December 7, 8, and 9th.  Of contact the organization at (410) 745-0745 or info@christmasinstmichaels.org 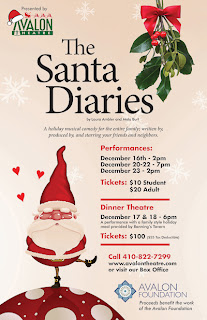 Every year, the Avalon Theater  puts on a Christmas show the week before Christmas.  It's community theater at its finest.  All of the actors are local people, and most of the sold-out audience also live locally and make attending the Christmas show at the Avalon an annual event.

Early in 2012 The Avalon Foundation sent word out to local writers inquiring about original plays with a Christmas theme for the 2012 Christmas show.  Mala and Laura pitched the idea of doing a play based on The Santa Diaries, and the Avalon accepted their proposal.  The authors wrote a screen play and the result of their hard work opens December 16th and is this year's Christmas show at the Avalon.

The story is based on the Santa Diaries book.  An iconic figure in a small town who defines Christmas in the community, has had an accident just before the holidays.  His son, who has become a famous actor and lives in Los Angeles must fly home to take care of his ailing Dad.  The son also fills in for his dad directing the annual community Christmas play and in the process - through reconnecting with his hometown he rediscovers the meaning of Christmas - and... falls in love.

The Avalon Theater will run seven performances of The Santa Diaries play from December 16th through December 23rd.  The cast of 80 actors (57 of them are children) includes people from ages 3 to 87 and all of them are from the local community.

This is Community Theater at its finest hour.  A romantic musical comedy written by local writers, produced in a local theater with local actors with a Christmas theme ... Talk about catching the Christmas spirit!

When Mala and Laura sent me this book last year just before Christmas, my initial thought was "that's nice... but I'm not from St. Michaels."  Because I didn't connect with that community, I thought the book was not for me.  But this year I picked it back up and began reading through it.  The themes are all the same in every small town.  The people in the Santa Diaries mirrored the personalities in my hometown of Riverdale and hometowns all over America.


I'd recommend the book and play for all people who enjoy memoirs, history and Christmas stories, but also for those who occasionally need to re-energize and stir up their own Christmas spirit. You can't help but be joyful after reading this.

Get a FREE copy of Mindie Burgoyne's ebook (pdf file) Christmas Letters: 2006 to 2016, which contains a collection of her Christmas letters for ten years - -  when you sign up for the free Travel Hag Newsletter.