Happy Christmas, Hanukkah and Festivus for the Rest of Us 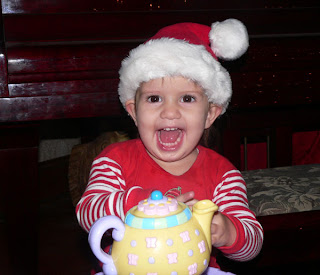 I was in Target the other night and ordered a soda and pretzel from the lady at the snack bar.  She must have said "Merry CHRISTMAS" five times during our short transaction.  I replied, Merry Christmas once or twice.

After the transaction was done and I sat down to eat my pretzel, I got the whole schpeel.  The lady went on ad nauseum about how she says "Merry Christmas" and not Happy Holidays, and it's Jesus' birthday and Jesus is the reason for the season and political correctness is killing our culture, and the Happy Holidays and Seasons Greetings phrases are anti-Christian.  ...and she's a Christian.

Geez.  I just wanted a pretzel.

I was once married to an Iranian. This was back before the Iranian Revolution and before the conservative Islamic traditions were adopted in Iran.  My ex husband was raised in a good Muslim (Moslem back then) family.  His parents did the traditional prayers daily.

I was always overwhelmed to see this family react to Americans celebrating Christmas.  They were enthralled by the magic, the decorations, the music, the food, wrapping, trees, Santa and the coming together of the entire country over one special day.  And though they were not and never were going to be Christians, they wanted to be a part of the joy.  Eventually they got a tree and did the presents and the wrapping and did their own version of celebrating.

They did things like spray that artificial snow on the tree. (this was back in the late 1970s - early 1980s)  They would wrap as many presents as possible. And the presents weren't necesarily meaningful or needed. The thrill was in the unwrapping. Everyone would gather in the living room. The television would be on - with volume all the way down - and then it would start... this massive throwing of presents and wildly unwrapping. There was laughter and excitement and exclaiming about the gifts inside the wrap. All were joyful, and the whole thing would take about 20 minutes. They were modeling what they saw the Americans doing. It seemed so fun to them to do the decorations and the presents.

The Christmas spirit is a living thing.  It's palpable. And though the holiday itself is rooted in the birth Christ and the belief that Jesus was God incarnate, the Christmas message of peace on earth and good will to all can resonate with all faiths.  It's something the entire world can embrace - even the non-Christians.  Isn't that a beautiful thing?  Must we quibble about words or coveting our holiday - shutting others out who don't believe exactly as we do?

Who cares how we greet each other if the greeting is filled with love and sincerity?  If you wish me a Merry Christmas or a Happy Holidays, why should I scrutinize your intention or dilute the power of a spiritual moment by focusing on which words you chose?


Here's to wishing you happiness and joy during this holiday season.


Get a FREE copy of Mindie Burgoyne's ebook (pdf file) Christmas Letters: 2006 to 2016, which contains a collection of her Christmas letters for ten years - -  when you sign up for the free Travel Hag Newsletter.