St. Francis of Assisi - I Didn't Like Him at First 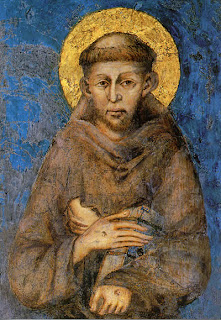 Today is the feast of St. Francis of Assisi.  As a child and young adult I never liked St. Francis.  I attended Catholic school and was socially entrenched in church life growing up.  St. Francis was so common - so ordinary.  His image was in almost every classroom, and it was always kind of girly with birds flying around him... unless it was one of him showing his wounds of Christ with skulls at his feet.

St. Francis was so overdone and ordinary


St. Francis everywhere in my life.  My first grade teacher was Sister Francis Clare, who took BOTH names of the saints who founded the first Franciscan orders. The first song she taught us was "Good St. Francis."

The family of my closest childhood friend started a Franciscan community.  Every time I went to their house ... more pictures - more focus on Francis.  Birdbaths, holy cards, statues, medals, a kid named Francis in every family.  Geez - we were inundated with him.  After awhile Francis was like an old movie replaying over and over with sound turned off.  Combine this overkill with the stories of St. Francis loving poverty and he just got more unpopular in my mind... until I saw Franco Zeffirelli's Brother Sun, Sister Moon in my late twenties. By then it was an old movie, but this story of the life of St. Francis  - who was born Giovanni Francisco Bernardoni - changed me.


Most people know the story of Francis.  He was born in the late 12th century to a wealthy merchant.  He fought in the Crusades, was wounded and changed by what he saw in the war.  While recovering from his wounds (and nearly dying from them), Francis had a vision, and his world never looked the same after that. He saw the corruption in the Church and the disparity between the rich and poor.  It disgusted him.  After a brief but futile effort to convince his family to turn away from the selfish love of riches and recognize the poor among them, Francis did a radical thing. He stripped naked in the town square and gave all his possessions back to his father and walked away - forever.

Francis' method of protest was silent action.  Pretty soon, others who could see the same truth joined him.  He formed a community of brothers who lived away from town, practiced service in the community, and depended on them for sustenance and survival. Francis was big on service and showing others how it should be done rather than preaching about it or writing about it.  Silent action was his method.

I have friends who are Franciscan friars and I was surprised to learn that they really do live a life of poverty by our standards.  Their order requires that they have no bank accounts, no great assets and they personally own very little.  Everything is shared in community.  They must practice obedience to their superiors, and their physical needs are met by the order.  While other religious orders teach, preach, or pray, the Franciscan mission is to serve the community - face to face get-your-hands-dirty service to others.


On the surface, the character of the Franciscans is a mixture of loving animals, being poor and helping the needy.  But what finally won me over and drew me to the Franciscan order is the real charism - and the movie Brother Sun, Sister Moon illustrated this.  The core of what St. Francis taught was humility and living your life according to the Gospels - basically following what Jesus said.  So humility is the code and Jesus wrote the rule book for how we make life choices.

The humility they embrace is not self humiliation or berating oneself.  A Franciscan friar once told me that humility is no more than a true sense of self.  Just knowing exactly who you are and who you are not, and living out your life as the real you.  It's the same concept Hans Christian Anderson brought us in The Emperor's New Clothes. We're all equal  - emperor and little boy - and helping each other to get through this life is more important than the things we acquire that falsely elevate our worth.

Francis stripped away the clothes of the emperor. He demonstrated love through service and care to all people equally whether they were a leper or the pope.

So Francis finally caught me in the end. I embraced the Franciscan 3rd order (lay order) many years ago, and became a part of the largest religious order in the Christian world - and the second largest worldwide. These are amazing fruits yielded from seeds planted by one man from Assisi who rejected materialism and corruption, and chose to protest its existence by doing.