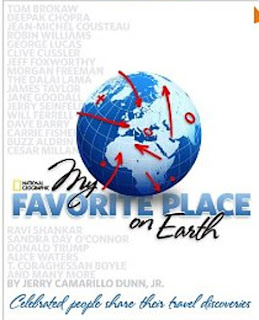 I ordered My Favorite Place on Earth, Celebrated People Share Their Travel Discoveries by Jerry Camarillo Dunn because it was cheap, and I curious to know what James Taylor, Josh Groban and Loretta Lynn had to say about their favorite places.  The book has turned out to be one of my favorite travel books (and I have a slew).

National Geographic has published it, so I knew the photographs would be spectacular.  What I didn't know is that some of these celebrities have serious writing talent, which you'd expect from acclaimed writers - but Robin Williams? Buzz Aldrin? Morgan Freeman?

75 well-known personalities - movie stars, politicians, song writers, comedians, scientists, journalists - each share about 1500 - 2000 words on his or her most favorite place on earth.  Each entry is followed with "Compass Points" describing the location, its history and tourism information.  Then Dunn adds an author bio detailing interesting facts about the person who wrote that particular entry.

I didn't read this book in order.  I skipped around.  The last entry I read was the author's favorite place - a film studio in India - only I didn't know I had read all the others.  I kept flipping through the book to find one I hadn't read yet .... but there were no more.  I was so disappointed.  I'd love to see a Volume II.

I know a book is good when I reach for highlighter.  I was compelled to underline lines like Ray Bradbury's reference to spending an evening in Paris:


I took a taxicab with some friends to Les Deux Magots, the cafe where Hemingway used to go.  Paris and the twilight seized and held me immediately.  It was the blue hour, the hour of enchantment.  As we motored past the Louvre, it was painted ancient gold by the sun.  Every leaf on every bush and tree was bronzed with twilight illumination.

I feel the skin of life on the planet as a sort of coevolved life form.  It has a type of consciousness that we humans - with individuated consciousness and an ego-based worldview - see as alien.

Guidebook king, Arthur Frommer describes Ubud on the island of Bali as being one of the most hospitable places on earth. He describes the Balinese as being "among the most generous and outgoing of all the people I've met in a long life of travel."

Painter, Jamie Wyeth describes his island home in a Maine lighthouse, and his endeavor to attract Ravens to his landscape by planting a dead cow in his yard.  Clive Cussler describes his Paradise Valley home in Arizona as his favorite place, mentioning that he has mannequin replica of himself sitting at the front window, and that all of his awards are hung in the bathroom.  Deepak Chopra loves Jeruselem, Tom Brokaw loves Tibet, and I've never heard the Sequoias describes so beautifully as in the entry by novelist, T. Coraghessan Boyle.  Jane Goodall could have expanded her entry on Gombe in the Tanzania, and I'd have read on forever.  Her prose captivates, engages, enchants.

My favorite entry was by Sandra Day O'Connor.  She describes her home state, Arizona as her favorite place on earth, retelling stories of her childhood and dramatically painting word pictures of a desert landscape where any kind of water is magic.  She recounts her struggle with breast cancer and how her doctors told her to envision a place that meant a lot to her and see herself in that place as part of her healing.  She visualized walking around the mountain at Iron Springs mentally recalling each vista along the way.

The author bios at the end of each entry are a hoot.  The reader discovers such interesting things about these celebrated people.  Who knew Sandra Day O'Connor was inducted into the National Cowgirl Hall of Fame?  Or that Suze Orman was a waitress at Buttercup Bakery in Berkley, CA? Or that film maker, George Lucas won the National Medal of Technology - the nation's highest award for technological achievement?


For the Impatient and Those With A.D.D.

This is the kind of book you can put by the bed and read one entry a night, unless your me and found the entries so intriguing that you kept on reading.  Because the entries are so short, it's a perfect book for those with short attention spans or very little time to read.  It may be hard to snag a copy, as it was published in 2009.  Ask your local bookstore to order you one, or get it on Amazon.  I found the Kindle edition is especially nice for having something to read during short waits at the doctor's office, at red lights (yes I do) and at very boring meeting when you're pretending to be taking notes into your iPad.  <-- of course, I never do this.