My Best Thanksgiving - Homless, Broke and in Hospital - 1980

Thirty one Thanksgivings ago I was twenty-one years old and in the hospital.  I was homeless, having been evicted from our apartment and was relying on the kindness of my sister who provided a place for me and my 22-month old son to live in her finished basement.  My unreliable husband had fled to live with his family, and left me to find the eviction notice on my door.

It was one of those dark times in my past - followed by more dark times.  But one bright beam of goodness came to me on that Thanksgiving - and it changed every Thanksgiving to come. 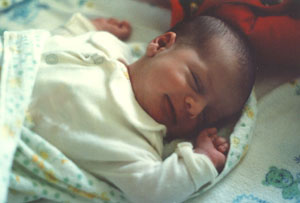 On Tuesday morning, November 24, 1980, I woke up in the early hours feeling contractions.  My baby was due the next day.  I called my ex-husband to come take me to the hospital.  When he arrived at my sister's house I couldn't find the car keys to my station wagon.  My toddler, Dominic had been playing with them (we found them later tucked in an empty tupperware sugar bowl).  So I rode to the hospital in my ex's 1974 Ford Pinto.  It had no front seat.... just springs with several blankets thrown on top.

What an awful ride - in so many ways.

But within a few hours, my little miracle was born.  I named him after the Elton John song "Daniel" (all my children were named for songs).  It's funny how a little newborn face injects hope into the world around, and all those dark places seem to melt away.

In those intimate early moments between mother and newborn child - there's a non-verbal language, which communicates feelings so deep.  Like every mother, I blessed him, I prayed for him, I vowed to protect him, to cherish him.  I wondered what he'd become, what kind of family he'd have, whether or not he'd love me forever the way I knew I'd love him.

I didn't get to hold Daniel right away.  He'd gone into fetal distress, so for the first days I had to look at him through the nursery window in his little isolette.  Finally, in the early hours of Thanksgiving day, the nurse wheeled Daniel into my room and lifted him out of his plexiglass infant bed on wheels and handed him to me.  He had enormous blue eyes... almost too big for his little face.  I was in love.

How could any subsequent Thanksgiving top that? 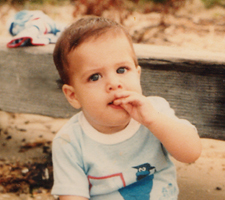 Daniel and I spent his first Thanksgiving in my hospital bed. He'd cry every time I'd put him down, so I just held him.  My family, who was caring for my other little boy, was celebrating Thanksgiving at somebody's house ... I don't remember where.  So it was just Daniel and me for the holiday.

My neighbor, Ruth brought me some of her Thanksgiving dinner that evening.  But secretly I hoped she wouldn't stay too long, because I wanted to go back to holding Daniel.  My doctor said I held him to much and shouldn't fall asleep with him in the bed.

I ignored the doctor.

That was a great beginning, and though Daniel gave me some worrisome times, he turned out to be such a nice young man - a wonderful son, husband and father.

Danny is a lot of fun.  He can laugh at himself .. and at all of us.  He never took himself (or anyone else) too seriously.  He has always been able to make me laugh.

I'm still thankful for Danny and his brother and sister. Each one has brought something special and ever changing into my world.

Danny is my Thanksgiving baby.  All our Thanksgivings are combined with a celebrating his birthday, which always falls within a day or two.

This year - his birthday is on Thanksgiving, and we're going to his house for dinner.

Happy birthday, Danny Boy.  I love you, so.
Email Post
Labels: Family Holidays What I think