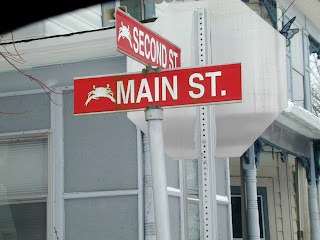 We've been meaning to get a new dishwasher for the past year.  Ours was a cheap model that lasted only 8 years.  All the wheels but one had broken off the bottom rack, the utensil holder broke the first week we had it, several of the tines had rusted and broken - and it didn't clean the dishes very well.  So I finally told Dan Burgoyne to go buy a new one.

Dan is a huge proponent for buying local items from local people and avoiding the big box stores if he can.  He went down to Lusby True Value Hardware in Pocomoke City (about 18 miles from our home) and talked to the owner about dishwashers.  Then he checked Lowe's and Home Depot.  We set out together on a Saturday with his list of possibilities.  I recommended adding H&H Furniture and Appliances (also in Pocomoke) as a stop because I knew the owners and loved the store.  We went to H&H first.  The customer service was thorough and personal.  The salesman had so much knowledge and helped us chose the best dishwasher for the best price.  We found one we wanted to buy, but planned to visit Lusby's and Lowe's to compare price before making the final decision.

When we got to Lusby's the owner was on the phone with a customer.  We went into the appliance section, looked at the dishwashers, compared features, decided we still wanted the one at H&H, and then set off for Lowe's.  As Dan's hand was on the door to exit, the owner rushed out.  He remembered Dan from the previous visit and called out to us, "Hello. Sorry I was on the phone when you came in. I'm the only one in the store today.  Did you decide on a dishwasher yet?"

It had been weeks since Dan had been in that store.  I was surprised this guy remembered him and remembered that he was looking for a dishwasher. Dan answered and the two began to talk about dishwashers again.  This conversation drew us back into the store and into further discussion.  Within an hour we left having written an $867 check for the perfect dishwasher including the delivery (free) and installation.  We left happy customers, feeling valued by the store we were buying from, with a local relationship that we could trust and come back to again and again.

How many big box stores offer that combination?

As a bonus we got several referrals from the guy at Lusby's for good local house painters and someone who could re-laminate our kitchen counter.

We checked the price of the dishwasher we bought at Lusby's both at Lowe's and Home Depot.  The prices were pretty much the same with the big box stores having a higher cost for delivery and installation.

It makes so much sense to by from a local person or family rather than an "corporate entity" especially in rural areas.  I have nothing against the big box stores, I go to Walmart, Target, and Home Depot same as other folks, but I look at local stores for gift items and home supplies.

This holiday season, take a look at the old downtown neighborhoods around you.  See who you could support locally with your dollars.  If you're going to spend money, it might as well be fun, conversational, and form a relationship that may pay you back over the years.
Email Post
Labels: Business What I think