I Want to be a Camping Snob 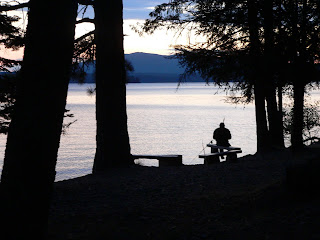 Many of my friends show interest when I mention Dan and I love the outdoors.  We kayak, fly fish, hike and explore the hidden landscapes along less-traveled back roads. But in some circles, when I mention camping, the conversation slows - even stops. Then I hear that worn-out, heard-it-a-million-times response, "My type of camping is the Holiday Inn."

I'd much rather sleep in my little r-pod camper (tiny, but complete with kitchen, bathroom and comfy beds). We can set it up in a remote location and have nothing but a nylon screen between us and the night-time cry of a loon on Moosehead Lake or the Atlantic waves crashing on Assateague Island. There is something magical about experiencing the wilderness at night, when all the tourists have gone ... back to their Holiday Inns.

We have good friends who love camping, and not everyone snubs it or views it as the sport of the lower classes who don't mind getting up-close-and-personal with dirt and bugs. But those hotel snobs that dis sleeping outdoors don't realize that camping isn't pitching a leaky tent on the hard, lumpy ground, drinking nasty water from a metal canteen and eating hot dogs, and canned beans. Camping trailers aren't cheap - and gear.... well, there are endless possibilities for camping apparel... and camping destinations.

But bring camping up at an art show, a wine tasting, or just about anywhere in Easton (my favorite Eastern Shore town) and the conversation tends to stall - even stop - until one of these beautiful people drives the discussion back around to more pleasant subjects- like the new spa, sailing, the latest foodie haunts, or alternative health practices.

Is camping so gauche, so low class?

Camping is all about the night.  Why be cooped up indoors when the world is teeming with sounds, smells, and sights rarely seen in hours between dawn and dusk.

Night, the beloved.  Night, when words fade and things come alive.  When the destructive analysis of day is done, and all that is truly important becomes whole and sound again.  When man reassembles his fragmentary self and grows with the calm of a tree.  ~Antoine de Saint-Exupéry

I'd like to turn the tables on the camping bashers... maybe round up a few camping-loving buddies decked out in the finest L.L. Bean ware, and hatch a plan to converse about camping in mixed circles with a slight air of superiority. We could move through the gallery crowd talking smugly about new camping equipment (like the O-Grill ), upscale camping recipes like Madyson's Gourmet Marshmallow Fluff or trendy outdoor ware like the Pathfinder LED Cap with a pin-head size lamp tucked into the brim for seeing where you're walking in the dark.

I could mention how I recently camped with a nationally known chef who aided Julia Child for years. We camped side-by-side in the North Maine Woods. By the light of a lantern she created a fabulous shrimp dish over an open fire complimented with roasted veggies and fine wine. We dined outside by citronella candlelight with a moonlit view of Moosehead Lake.

I'm not sure I would make a good camping snob, but I'd love to convince those that poo-poo camping that our life is richer for having spent the night outdoors. I've awakened in the middle of the night in northern Montana to the sound of elk calling across the Madison River  - a sound similar to air being pushed through an old pipe organ.  I woke my husband who is 70% deaf and encouraged him to leave the camper and  listen for it.  He heard it, and a memory was unexpectedly created in that instant.  That meant something to him... and to me. 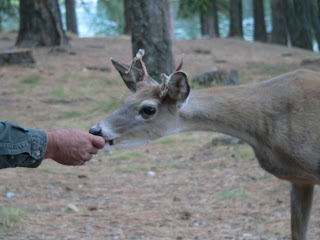 Then there's all the things you miss because a Holiday Inn (or other lodging) isn't near - like the the nighttime yelp of seals, the fogs horns calling out across the Bay of Fundy, the muffled intermittent flash of light piercing the fog at East Quoddy Head. ... or discovering how a young buck sheds the velvet on his antlers - and having the opportunity to pluck a piece off  because these particular young deer have a level of comfort with the campers in certain primitive sites. 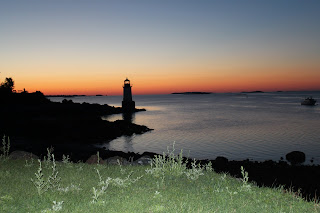 While I may be able to see the sun peep above the horizon on Salem Harbor at dawn from a B&B or hotel in Marblehead, I wouldn't be able to add to that vision the silhouette of my husband fly fishing on a rocky outcropping beside the Winter Island light house unless I was camped nearby.  How much is that worth?

I'm not against staying in a hotel. I have great travel memories that include staying in hotels, inns, and B&Bs. But camping is also a worthy mode of travel, one that allows the traveler to visit the softer side of earth - the one that reveals itself between dusk and dawn.

Rachel Carson put it best when addressing the wonder of the night sky ...
... but it can be seen many scores of nights in any year, and so the lights burned in the cottages and the inhabitants probably gave not a thought to the beauty overhead; and because they could see it almost any night, perhaps they never will.

Camping, ushers us into this magical world of twilight, midnight, dawn and all the hours in between.  The convenience of lodging is a barrier to that world. How does one duplicate the feeling of starting a morning fire as dawn breaks, and watching the outdoors wake up against the smell of fresh brewed coffee and sizzling eggs? And though the mornings outdoors can sometimes be damp and leave a chill, Dan and I rejoice in being able to eat breakfast together while we watch the fog lift off a river or lake. And though we love our home and the comforts it provides, we so look forward to these mornings ... and evenings by the campfire... when no words are necessary.