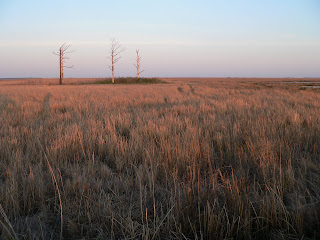 Ever feel tense, stressed out, on edge, wishing for a sedative to calm your nerves? Instead of reaching for the wine, the beer or the Valium, try taking a drive through lower Dorchester County on Maryland's Eastern Shore. If you're lucky enough (like me) to live close by, it's not so difficult to get away for a little while. If you're not so close in proximity, make the time to visit this region. You won't be sorry.

Steeped in history, subject of legend and lore, with landscapes uninterrupted by development, and with only a hint of human habitation, Lower Dorchester has a medicinal effect on the spirit.

Turn off Route 50 onto Route 16, also known as Church Creek Road. Go about six miles and turn left towards Blackwater. Soon you'll begin to feel it ... your blood pressure drops, your breathing slows, your muscles relax. Turn left again on Key Wallace Drive and your awareness will change. Colors become a little brighter. That rare light of the Eastern Shore charges the landscape with electrifying shades that inspire artists, poets, holy men, and lovers to look deeper; to see a new dimension.

As you pass through the village of Seward, you'll cross the Little Blackwater River. The sky spreads out and clouds reflect the blues and grays of a river perfectly framed by acres of marsh grass, forty shades of green. Ireland has nothing on Lower Dorchester. 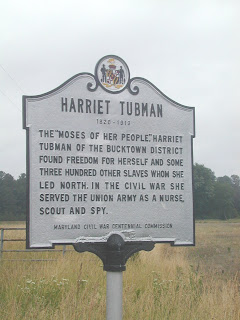 At the end of Key Wallace drive make a left on Maple Dam and then bear right onto Greenbrier Road. You're passing by the fields that were once home to Harriet Tubman who grew up and worked as a slave on a nearby plantation. A historic marker defines the likely place where the Moses of her people lived and eventually escaped via the Underground Railroad. Past the marker is Bucktown where the Bucktown Store has been standing since the Harriet's day. She would have visited this store often, and it was here that she received a head injury that troubled her health for the rest of her long life.

A little past Bucktown is Decoursey Bridge Road - a road of legend... a sad, sad, scary legend. The Eastern Shore wasn't host to any Civil War battles, but it was a fine place to hide Confederate money for funding the war. Many of the African American slaves served as spies for the Union Army, leaking information about where gold was stored and the movements of Southern sympathizers. It's been said that during the Civil War, a plantation owner near Decoursey Road was suspected of holding a large cache of Confederate money. His favorite slave, a large African woman named Lizz, was a Union spy. Some folks say her master got wise to her traitorous ways. He knew Union officers would descend on his farm and take the Confederate gold. He asked Lizz to help him move the treasure. They set out to a forested, swampy area near Decoursey Bridge on the Transquaking River. Lizz buried the gold where her master instructed.He then said, "Let's plant a seedling over it to disguise the spot." When Lizz bent down to bury the seedling, her master brutally cut of off her head and left her dismembered corpse to rot in the swamp.

Today many locals believe that Big Lizz still haunts the area near Decoursey Bridge. They say if you drive onto the bridge at midnight, turn off your car, flash your lights and honk three times, Big Lizz will emerge from the swamp with her bloody head in her hand. She'll motion to you to come with her. If you follow, she'll show you where her master’s yet undiscovered treasure is buried. But those who've seen her and followed her have never returned. Many Dorchester Countians will share their personal stories of frightening experiences on the Decoursey Bridge when they tempted Big Lizz to come out into the swamp and lead them to the treasure.

As you travel down Decoursey Bridge Road you'll come to a spot where the bridge crosses the Transquaking River.  Take some time here. Stop the car. Get out and look around. Notice the details of the surroundings - the river, the pines, the grasses, the waterfowl, and how the winds move and unsettle the objects in the landscape. It's easy to imagine the same landscape one hundred fifty years ago. Little has changed since the Civil War, since slaves worked the local farmland, and since the unfortunate Big Lizz and her murderous master had their last encounter in the nearby woods.

Turn your car around and retrace your steps. Go left on Maple Dam and continue straight. Shortly you'll come into the Blackwater Wildlife Refuge, and you'll curse yourself if you don't have a camera and binoculars.Every time I escort visitors into this section of Dorchester, silence falls at this stretch of road. One simply can't take it all in. The landscape shifts; the terrain changes. The sharp gray stubs of dead, topless trees poke up through the fluid, rushing motion of green and brown marshes. Great Blue Herons sail along the horizon, almost touching the ridges of the sweeping grass. Ospreys perch in large, gangly nests, and atop anything vertical, and the occasional bald eagle is seen soaring above, scanning the marshes and rivers for prey. The light in Blackwater changes by the quarter hour. The colors you see now will be slightly different in fifteen minutes. The wide, open sky and reflection offered by the surrounding water allow for maximum light exposure, and colors are as bright here as anywhere in the world. Even when the light is muted by clouds and rain, the stunning colors of Blackwater have no equal. I often hear visitors say, "I can't believe this is in Maryland."

After leaving Blackwater, the road will eventually dead end in the small village of Andrews now marked only by a few abandoned buildings. Andrews and local villages with names like Wingate, Crapo, Toddville, Bishops Head, and Crocheron, were once active communities in this region known as "Down Below." Folks made their living off the water mostly, but as the bounty of the Chesapeake diminished, so did the populations in these small villages. Turn left at Andrews and you can meander through the remains of these small historical villages. A special spot lies out the Bishops Head road where you can drive the dirt road through the Chesapeake Wetlands National Wildlife Refuge complex. The views are spectacular. Let your soul graze on beauty of the tides that flank the narrow spit of land that is the refuge. These are big water views where, at the end of the peninsula one can see the Honga River, Fishing Bay, the Nanticoke River, the Tangier Sound and even the Chesapeake Bay in the distance.

Head north out of Bishops Head and continue to Golden Hill. You’ll be on your way to Hoopers Island, a series of three small islands connected by bridges and causeways. Some families on these islands have lived here for seventeen generations. Most still work on the water There are several seafood processing plants in this area, all family owned. The now famous, multimillion dollar corporation, Phillips Seafood started here, the A.E. Phillips seafood processing plant, still owned by the Phillips family operates in Fishing Creek.

There are two other peninsulas to explore in Lower Dorchester - Taylors Island and Elliott Island. Similar in landscape, they offer the driver a calm, comfortable setting guaranteed to be relaxing and afford prime subject matter for photographs. Maps of Dorchester County with all the roads mentioned in this post can be picked up at the Dorchester County Chamber of Commerce office on Poplar Street in Cambridge. Maps are free as is the drive. Your only expense is time and gasoline, a worthy price for a clear head and rejuvenated spirit.

I've gathered a few digital photos of the places mentioned in this post and put them in a slide show which is embedded below. Hope they give you a glimpse of what the traveler sees in Lower Dorchester. Please let me know about your experiences and your impressions of this magical place.