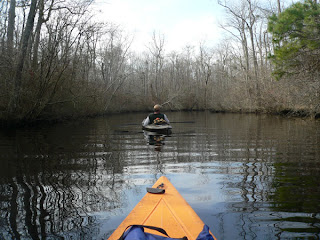 Dan and I decided to sack working around the house for the day and instead headed out to explore some of Maryland’s inviting flatwater. Even in the winter there are endless opportunities for kayak trips on the Lower Eastern Shore. Our destination, Dividing Creek was only about fifteen miles from our home. I’d been itching to experience paddling on Dividing Creek which runs through the Pocomoke swamp dividing Worcester from Somerset County, but our friend, Bob Huey who lives near the creek said that in the summer snakes hang from the trees that drape over the waterway and are known to drop into passing boats. I figured winter was a good time for this trip because the snakes are mostly asleep in January. 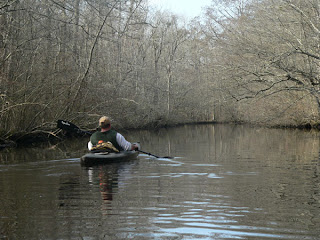 Dividing Creek empties into the Pocomoke River just a few miles NE of Pocomoke City. It runs all the way to the Wicomico River near Allen in Somerset County and most of the way is navigable by kayak. Its water is murky like the Pocomoke, still and flat and remarkably deep as it twists endlessly through the Pocomoke swamp. In the Pocomoke River basin which includes Dividing Creek, there are 172 species of birds, 27 species of mammals, 14 species of amphibians and 29 species of reptiles (lots of snakes). This place is teeming with life and mostly uninterrupted by human intervention save for a few houses in spots.

My husband and I have kayaks to match our personalities. His is a Wilderness kayak – green, of course as everything my husband has including his car, his truck and 90% of his clothing is green. Dan’s kayak is just under 50 lbs with no frills. I have a mango colored Heritage Featherlite kayak with padded seat, storage in front and back and a removable drainage plug. Because of their open pilot area and storage capacity, these kayaks are ideal for all day trips and light enough to easily put on top of the car. 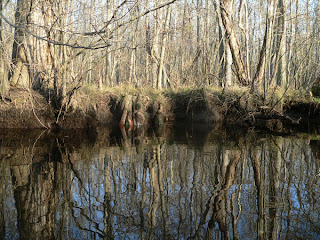 We launched at the Winter Quarters public dock in Pocomoke, so named because it was once the winter camp for the Indians that lived in the area. You launch here into the Pocomoke River, which in itself is a worthy kayak trip. Pocomoke is an Algonquin word meaning dark or black water. This relatively narrow river which stretches some 73 miles is the deepest river in Maryland for its width and is bordered by swampland and forest rich with cypress and pine trees. The seepage from the trees makes the water dark or black- thus the name Pocomoke.

After going about one mile down river (south from the dock), Dividing Creek subtly opens to the left where the paddler can enter an enchanting terrain, immediately different from the River’s expansive domain. The bald cypress tower overhead while other trees lean in over the waterway sometimes meeting in middle creating a tunnel-like vista. The water was completely flat day we went, though the high banks and thick wooded surroundings would weaken any wind that might cause a ripple most days.

The wildlife, flora and fauna are noticeably less in the winter, but the nakedness of the forest allows the paddler to see what is typically hidden in spring and summer.

There are no snakes dangling from above and no mosquitoes, flies, gnats or other insects. The gray / brown of the nude forest and the coffee colored water allows the vibrant red of winterberry and green of the loblolly pine to make their own show. The birds are more visible and even the new tufts of grass sprouting up due to a recent warm spell seem more green than usual. I have read that in the summer months, the water lilies abound here. We did notice some lily roots floating near the banks. I picked one up and it probably weighed three or four pounds.

A buzzard came remarkably close to us, and shortly after his abrupt departure I smelled death – obviously a carcass nearby that was dinner for the buzzard until we interrupted. The cypress knees that poke above the waterline hugging the tree trunks start to take on strange characteristics after a awhile. I passed by a pair of knees nearly three feet tall that looked like a couple of old druids speaking to the masses in front of them (other knees) –or perhaps they were speaking to me … telling the story of Dividing Creek, who has passed through here, who has died here, who has lived here, what’s up ahead. 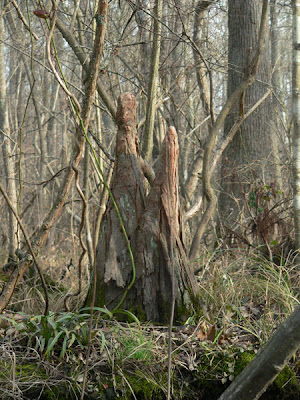 Just after we passed the druid knees I felt a cold spot… that is, a place where the temperature suddenly dropped... then back to normal temperature again. Dan didn’t feel it. I thought maybe I imagined it or exaggerated the coldness in my mind, but strangely, I felt the same cold spot on the return trip just near the cypress knees that looked like druids. The afternoon sun was bright creating some phenomenal reflections on the flat, dark water. There were times when you could stare at the waterline unable to tell the difference from what was real and what was reflection. The only difference between subject and reflection was the depth and vividness of color was stronger in the reflected image.

When it was time eat, Dan backed his kayak into a small gut and lodged his paddle between some roots to keep still. I followed suit and we feasted on Subway value meals and bottled water. While stopped we noticed more details of the jewels in the surrounding swamp.

On the return trip going with the current we paddled only to steer the kayaks letting the current take us back to the Pocomoke. Dan said, “This is what I call kayaking!” I put my feet up on the top of the kayak and glided all the way down the creek in less than 20 minutes using my paddle only to guide. 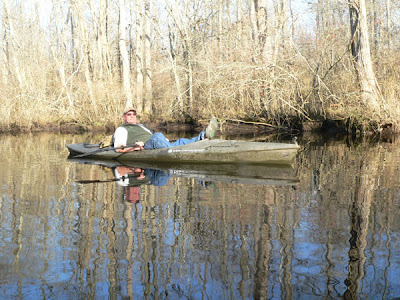 Once we came into the Pocomoke River I thought about the comfort I felt in this place. I have traveled to 49 states and about a dozen countries, and will never tire of the thrill of visiting new places. But today was not a visit – it was a new look at my home. The sameness of the landscape and wildlife that are typically Maryland, especially the Eastern Shore was constant. But like a lover, Maryland continues to reveal hidden truths the deeper you explore, and the intimacy and bond grows richer and deeper. Maryland never disappoints. She is constantly renewing herself and always welcoming.

While paddling in and thinking of home and welcoming I was surprised to hear someone from the dock call out, “Hi Dan.” It was our friend, Bob Huey with his wife Cathy. They live on the road that leads to the dock and had gone for a walk, seen our car and decided to wait awhile to see if we came in. They helped us pull up our gear and load it into the cars and invited back to their house for drinks.