"Sometimes we have to travel to the edge of ourselves to find our center."
~ Buck Ghosthorse

Visitors to my Thin Places blog often ask, "what is a thin place?" My response is short - a thin place is a place where the veil between this world and the next (the eternal world) is thin.

While I've been to hundreds of thin places in Western Europe, I've been to few in the US, probably less than twenty or thirty - and I have visited 49 of the fifty states (missing Alaska yet).

Pine Ridge Indian Reservation in South Dakota, famous for the Wounded Knee massacre is a very thin place. In 1890 300 Lakota Indian men, women and children along with 25 American soldiers were gunned down in a field on a cold December day. Many more died later as a result of freezing weather and lack of available medical care. The dead were eventually collected by the American soldiers and thrown into a mass grave which is now humbly marked on the reservation - located exactly in the center of the general cemetery. 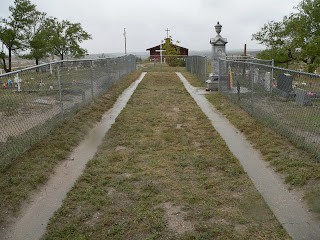 Near the mass grave is a newer, bronze headstone marked Lost Bird. This is the grave of a nineteen year old Lakota girl who was an infant at the time of the massacre. 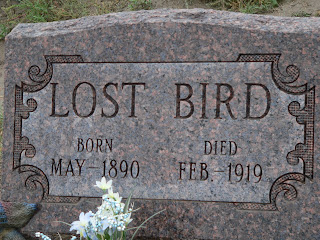 She was thrown into the mass grave with the others - presumed dead, but a soldier noticed she was alive and the infant was handed over to a military officer. The child's mother had survived but was severely wounded and naturally shocked by the ordeal. The mother agreed to surrender her child to the military officer who adopted the child and raised her as his own. Her Lakota name was Lost Bird.

Lost Bird died young, and though she was adopted by a white man, she retained her rights as a Lakota Sioux to be buried on the reservation. Her father returned her remains to the Pine Ridge cemetery, to rest beside those who were lost in the last Indian battle in America - the Battle of Wounded Knee.