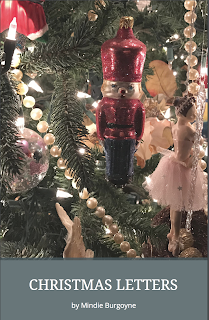 Christmas Letters:  2006 - 2016 is an ebook in pdf format, which features a compilation of ten years of Christmas letters sent by author and Travel Hag, Mindie Burgoyne. Each letter highlights events, reflections and travels for a particular year in a ten year span.

The ebook is sure to put you in the holiday spirit, or perhaps help you with writing your own Christmas letter.

"Letters are spiritual gifts that are often times more meaningful than any material thing we could offer a person. Letters connect one heart to another. What better gift could one give at Christmas?"
~Mindie Burgoyne

...There are so many messages and teachings that we can take away from the simple Christmas story, but the message we’re hearing loud and clear this year is that no matter how dark the days get, the light will come and there is always hope. And just on the other side of that veil separating this world from the eternal world is a Creator who is constantly reaching through with love, support and gifts of hope.  If we look with our hearts, we’ll see the reaching.   And if you, dear friends and family are receiving this Christmas letter, then we are recognizing you as being one of those gifts He gives to us.


...I agree with Gracie.  And it seems the older I get, the less I understand. I figure the best we can do is clutch the common truths that we do understand and know that even though life may throw us hardships that can sometimes seem unbearable, there’s always hope – hope of reinvention, of shifting circumstances, of new love and new beginnings. As time circles around us, life will get better again.  And the things that are always constant - love, hope and belief in something greater than ourselves – will sustain us.
~ Christmas Letter 2014

... I figure childless families should go out and get a kid to spend Christmas with. The joyful freedom and innocence children project at Christmas transforms even the stodgiest of adults. All the stories say so. It was Tiny Tim who moved Scrooge, the Little Drummer Boy who gave the greatest gift, and little Cindy Lou who pulled at the Grinch’s heartstrings. What happens to that wonder and magic and imagination? Why does growing up mean we must shed our belief in magic? Christmas is a time when we try to capture that in ourselves if only for one day. To really believe that there is “something vaster” behind the decorations and traditions, something that will wrap us in love and bind us with all who have gone before us, and all who are yet to be born. Something that will help us shed the image of ourselves that is clothed in secrets and lies, and reveal our real selves. The selves we were as children.

... This is the first time in my life I’ve lived alone. And, I’ve developed some interesting skills in Dan’s absence – like how to … manage a flock of free-range chickens, battle an infestation of poultry mites, relocate – not kill - black snakes, discard dead animal carcasses, fix and maintain an electric fence, balance the eco-system of a pond, repair a sump pump, jump start a car battery, take metal to the scrap yard – and get paid for it!, add a phone jack, and start the truck with a screwdriver. I learned how many roosters are TOO many (more than one). I’ve also learned why people who live alone become eccentric about animals, talking about them like they’re people, and fussing over them too much. In solitude one becomes more aware of the actions and responses of creatures. The animals have been great company for me, but I realized after a friend said, “You sure talk a lot about your dogs” that I may be in danger of becoming eccentric. I secretly wondered if naming all the chickens after French literary heroes or making home-made broth for dog-food gravy was too over the top for a normal person.